The New York Times recently published yet another article pushing the narrative that owning a firearm increases the risk of suicide.  To most people, this seems logical - but I know that the reasoning leading to this conclusion is false.  I have a great deal of experience with suicide, thanks to 10 years experience in EMS.  As a result, I absolutely know that every study I have ever seen on the issue of guns and suicide is pure bunk, as is this article.  Here's why.

1) As anyone who has ever been a first responder knows, the vast majority of so called "suicide attempts" are not in fact attempts to commit suicide.

Never the less, that will be the admission diagnosis.  So when is a suicide attempt not a suicide attempt?  Answer: When it is done to manipulate someone or as a "cry for help" - and this intent affects the method chosen.

This is something that I, as an EMT and Paramedic saw all the time.  For instance, we would get a call for an "overdose".  Arriving at the scene, we would find the person who had overdosed, usually on some over the counter medication.  They had then called the person they wished to manipulate and informed them that they had taken pills in an effort to kill themselves.  Of course, this person then either rushes over to the overdose "victim" or calls 911.  We would arrive and typically find a fully awake patient who now would be placed on a mental health hold due to "attempt suicide".  Frequently they would be interacting with the person they called.  In many cases they claimed to have taken such a small quantity of pills that it was clear there was no attempt to harm themselves.  Of course, everyone goes forward as if the person really wanted to die.  We would then transport the person to the county hospital on a mental health hold.  They would be admitted as "attempt suicide", method "medication overdose".  For every actual suicide attempt I responded to in my 10 years in EMS, I responded to 50 to 100 of these "non-suicide suicide attempts".

The problem arises when someone does a statistical study for suicide attempts and methods.  All of these "non-suicide suicide attempts" are counted as actual suicide attempts that did not succeed.  The false conclusion is reflected in the following quote from the NYT article:

“Many suicide attempts are impulsive, and the crisis that leads to them is fleeting,” Dr. Miller said. “The method you use largely determines whether you live or die. And if you use a gun, you are far more likely to die than with other methods, like taking pills. With guns, you usually do not get a second chance.”

That conclusion is written based on faulty information.  The vast majority of people who take pills do not want to die.  Those who use firearms or other deadly methods do.

The second lesson I learned as an EMT/Paramedic is that people who really want to die choose a method that is quick and sure.  They do not want to be found and saved.  While the act seems impulsive to those left behind, it has been considered and likely planned for a long time.

In the US, where firearms are available, they are frequently chosen. however, they are not the only method of ending one's life quickly.  People use rope to hang themselves, they jump from high places and use many other methods.

Even the flawed research supports this conclusion.  Again referring to the NYT article we learn this on paragraph TWELVE:

"Another possibility was so-called reverse causation: that many buyers were bent on suicide before they bought the gun. The findings did provide some evidence of that. In the month immediately after first-time owners obtained their weapons (California has a 10-day waiting period), the risk of shooting themselves on purpose was nearly 500 per 100,000, about 100 times higher than similar non-owners; after several years it tapered off to about twice the rate."

3) The data from the rest of the world completely refutes the article's conclusion. 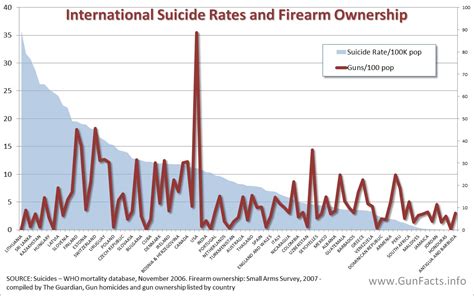 First, the nations that have the highest suicide rates frequently have very low to no legal firearms availability.  These nations include Russia 26.5 (93% higher than US), Belarus 21.4 (56% higher) and South Korea 20.2 (47% higher).  Somehow, people in these nations are able to commit suicide at very high rates without access to firearms.

Second, when we compare similar English speaking nations, that widely differ in their access to firearms, we do not see a huge difference in the suicide rates:

It is especially notable that Canada has seven times the firearms availability as the UK and virtually the same suicide rate.  If firearms are the factor this article claims, Canada's suicide rate should be much, much higher.

4) Finally, it is a practical impossibly to eliminate all suicide methods that those who truly wish to die might use.

In the UK the most common method is hanging - yet no one is trying to eliminate access to rope and other cordage.  We cannot eliminate access to every high place, or to traffic, or quick acting poisons, and the list goes on.  If we are going to reduce the suicide rate in the US, gun control is not the answer.  That's why some mental health professionals are speaking out against the idea.

Why do gun control advocates push gun control as the answer to suicide?  Well, as gun ownership and concealed carry have skyrocketed, the murder rate has dropped by 50% and violent crime has plummeted.  Their answer has been to push their own "gun death" figure that combines all firearms related deaths.  However, about 66% of these deaths are suicides.  If people realize that gun control has no hope of reducing suicides, those who are anti-gun rights lose their most powerful argument.   That is why they will continue to push this lie.
Posted by Vince Warde at 1:27 PM